Welcome      Prepare for Visit     Daily Schedule     Curriculum     Skits & Stories     Extra Activities     State Standards
Billy Dragoo (A True Licking County, Ohio Story) was known in Licking County as a 12 year old pioneer boy who was kidnapped by the Indians and raised in their traditions. This story is usually told for older students who are visiting Cornell School. Hazel always wore a fringed Indian dress and moccasins when she performed this skit. 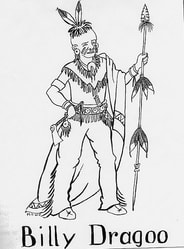 Picture the area around where you live and where you go to school as a wilderness where there are no roads, no houses.

Our story begins over 200 years ago (1786) near Pine Grove, Virginia (now West Virginia). A twelve-year old boy named Billy Dragoo was picking corn beans in a field near his log home. His father and brothers had gone hunting and his mother was in the house cooking food.

Nine Shawnee Indians rode their horses into the baryard and spotted Billy in the nearby cornfield. One Indian road his horse beside Billy and swooped him up on the horse beside him. Even though Billy resisted, he was no match for the strong brave.

Soon he was far away from his mother, father and his brothers. The Indians were headed toward Ohio and crossed the mighty Ohio River near Sistersville, West Virginia. That was a spot where the Ohio River was narrower and not as deep. They followed the river on the Ohio side until they came to the Muskingum River near what is now Marietta, Ohio. They followed the Muskingum River until they reached the Licking River in the Zanesville area. They continued on following the Licking River to Newark, Ohio. From Newark they came on to this area and were said to travel through Johnstown. Billy was the 3rd known white person to come this way. From here they traveled northwest to Springfield and then on the Sandusky, Ohio.
​
There Billy was made to run the gauntlet. The gauntlet is where Indian boys, Billy's age, got in two lines, each having a stick, which they hit him with, as they made him run between the two lines. Billy passed his test of Indian manhood and was adopted by the Ottawa Indians. Actually the Shawnees may have traded Billy to the Ottawas for something that they needed or wanted. You can imagine how awful and strange this must have been for Billy to be taken from his home and family into a strange place with people who were different. He may have been afraid for his life. Days, weeks, months and years passed and Billy began thinking of himself as an Indian. He married an Indian girl and had four children, two boys and two girls. When a young man, he lived with the chief and some say that he later became the chief of his tribe. Billy lived with the Indians during a time of war with the white people. They never made him fight against his own people, but had him stay behind to take care of the women and children.

Life with the Indians was difficult for they had to hunt for their food. He later said that there were several winters when he thought he would starve to death.

One time he traveled to Pittsburgh, Pennsylvania to buy a rifle. There he met a man that knew his real father. The man knew how hard the Dragoo family had looked for Billy so he begged him to go back to West Virginia with him. Billy would not go because he was satisfied with his life with the Indians. The man went back home and told Billy's family that Billy was alive and he had seen him with his own eyes. Billy's family had almost given up hope that they would see him again. One of Billy's brothers decided that he would try to find Billy and so he left West Virginia for Ohio. It was a long trip on horseback and may have taken some time because Billy's brother was asking everyone he saw along the way for information about his brother. Finally, near Toledo, Ohio he found Billy and they were united after over twenty years. They talked all night sharing what had happened since they had seen each other. Billy learned that he had another brother living in Licking County around present day Hanover, Ohio. Billy's brother wanted him to return to West Virginia with him, but Billy said he would not, but made a plan to all meet at his brother's house in Licking County.

Soon Billy was on his way to Licking County. Imagine the excitement and the emotion when they all got together near Hanover, Ohio. While there, Billy went to a church tent meeting and heard the word of God. When he returned home to his Indian family, he could not get the meeting out of his mind. Finally, he decided that the life he was living was not a proper way to live,

In 1810, Billy and his two sons returned to West Virginia. Four years later, Billy began a new life and married a white woman named Rebecca Matheny. He and Rebecca had three children. Billy remembered how beautiful Licking County was and so he packed up his family and moved near Newark, Ohio. At that time, Newark was only a small settlement with a few huts. Billy bought 50 acres of land and had 3 more children. Thirty year later, at age 87, Billy died in his home. He was still wearing an earring and an ornament in his nose. Some of his descendants still live in the Newark area.